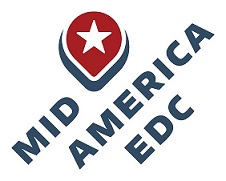 In 2015, Mid-America EDC completed a research study for analytics in the then 10-state region.  Since this time, our region has grown by three states – Kansas, Missouri, and Wyoming.  The Mid-America Economic Development Council (Mid-America EDC) is seeking proposals to complete an updated study to include all 13 states that would be released in 2020, which will analyze some of the strengths and common assets that are present in its 13-state region.  Mid-America EDC’s states are Illinois, Indiana, Iowa, Kansas, Ohio, Michigan, Minnesota, Missouri, Nebraska, North Dakota, South Dakota, Wisconsin, and Wyoming.

As a part of the study, please include:

The Mid-America EDC plans to use this information to (1) show and market the strengths of the region; (2) highlight common assets within the region; and (3) plan programming for our organization around the findings.

The Mid-America EDC will accept proposals which do not exceed $5000 for this study.  Please submit the proposals electronically to:  Tracey Hogan – Mid-America EDC – tracey@assnoffices.com, and you may email or call 614-228-4725 with any questions.  Proposals must be submitted by March 7, 2020.  Proposals should include: (1) an outline for the scope of work and a plan for completion, which will include dates; (2) a list of any staff who will be assigned to the project; and (3) three references for projects which are similar in nature.